Laura: A good time to be out of action?

A good time to be out of action?  The nights are getting darker and at the moment the wind and rain seems to never stop!  It’s safe to say we are heading quickly in to winter when everything horse related seems to be much more hard work, from arriving at the yard after work in the dark, to everywhere and everything seeming to be covered in mud already! So, as my friends keep trying to reassure me, now’s the time if there is ever a good time for Mikey to be out of action (all will be explained on that front).

Since last month, a lot has gone on (as it always seems to do with horses!) one minute I had a red rosette in my hands, the next I had a horse that was under vet instructions to have some time off. 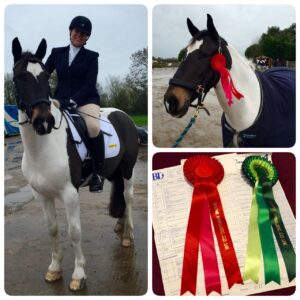 So, lets start with our red rosette. The last time we had competed at dressage was back in the summer, but earlier this month we went and did some unaffiliated dressage at one of our local venues Wing Jumping and Dressage Centre; we had entered for 2 prelim tests and on a very wet and windy day came away with a 1st and 4th place.  I was delighted. Mikey warmed up well and in our first test which was prelim 4 we managed to get 1st place with a respectable 67%.  Our 2nd test was prelim 13 and it felt a bit flat, we dropped a few marks as a result, but still managed a 4th place – not a bad day out.  I was really pleased with how we went, and could feel exactly what the judge had commented on in the second test whilst riding, I don’t know about you but sometimes I get my test sheet and cant always say I felt what the judges were seeing so it was nice for once to be in tune with the judge!  With such horrible weather I must say thank you to my niece Amy for playing role of head groom and my friend Emma for calling my tests (I still cant work out how to learn two tests together!)

This month a load of us from my yard headed to Your Horse Live.  As I am sure lots of you did, I expected to come away with armfuls of bargains – but it wasn’t to be this year, I hardly brought a thing – not a bad thing with Christmas coming J – save my pennies for a rainy day! 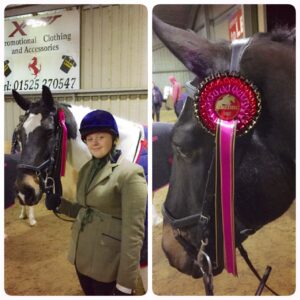 Amy and Mikey in hand showing

My niece Amy borrowed Mikey for the day again and took him in hand showing, there was a local show run by Leighton Buzzard, Standbridge and District Riding Club held at Liscombe Park Equestrian Centre, it was the first in their winter show series, its just up the road from us so we took him out for the day, they had a great time, Amy had been practising her running in the week leading up to the show and it paid off, they came third in Best Condition and then won both Child Handler and the Coloured class.  I think this might become a regular thing now – its lovely to have a horse that is well behaved enough for what really is a non-horsey person to be able to enjoy him!

So I mentioned Mikey is out of action just now, so my plans for the winter have hit a bit of a bump in the road, after the success of my first solo hack that I reported on last month, and a few hunting outings I had planned to do more of the same as the winter kicked in, however Mikey has other plans, (although we did have a lovely two and a half hour ride round Dunstable Downs with our  hacking buddy Nadine and her horse Moet – for most of the ride we had no idea where we were going so it was a bit of an adventure but he had a great time).

Out Hacking round Dunstable Downs

The weekend after he decided to cause himself a mischief galloping round the field and came in with a lump on his leg, he had thrown a splint, so he has had two weeks off work, and (as I am sure lots of you have experienced at some point over that time) we had the added chore of the slightly mind
numbing job of icing the leg twice a day to help reduce the swelling and encourage the splint to go cold.  Two weeks on and the splint has healed really well and has already reduced in size, I would like it to reduce a bit more though – I’m told I need some patience on that one!  Mikey has also been struggling with some weakness in his back end, so whilst the vet was out I took the chance to try and work out what might be causing that, as a result of a few investigations (all of which are still not 100% conclusive as to exactly what the problem might be) we have been put on a regime! Three weeks, no riding, just lunging, weighted boots for turn out and some trips to the water treadmill, I am told the water treadmill is great for improving strength in horses – he has his first visit next week – lets hope he likes it!

But in other news this time of year it seems lots of riding clubs have their annual AGM’s and as a member of a few local riding clubs I thought some of the members might like to try out some Honeychop, I attended the AGM for both Keysoe Riding Club aswell as Leighton Buzzard, Standbridge and District Riding Club, both clubs have lots of exciting plans for 2016 which was great to hear about, and the meetings were well attended, we offered everyone a free goody bag with a sample size of Honeychop and money off vouchers and a few lucky people who had entered the raffles won themselves a free full size bag – they went down a treat and everyone seemed pleased with their prizes.

Before he went off Mikey and I did get a chance to ride through Tim’s most recent exercise, riding a serpentine with jumps placed along the centre line.  As coincidence would have it just the week before I tried Tim’s version of this in one of my regular flat work lessons I had been doing the very same exercise but without the jumps.  The purpose of doing the exercise on the flat was to encourage me to better ride the outside shoulder and use my inside leg more as we turn, to really work to get Mikey turning through the serpentines without me taking a tug on the inside rein as we go (which can be a bad habit of mine).

Adding the jumps in to the equation really highlighted my straightness (or lack of) I would definitely try it again, repetition is the key, as we were sometimes getting 10 strides between fences and other times getting 11, once we are back up and running I would definitely give it another go – you could try it even if you didn’t want to jump by just riding the jumps as ground poles – it would still be beneficial! Try it!

Well, we have continued to chip away at our weak areas this month  mainly in our showjumping. Whilst the... 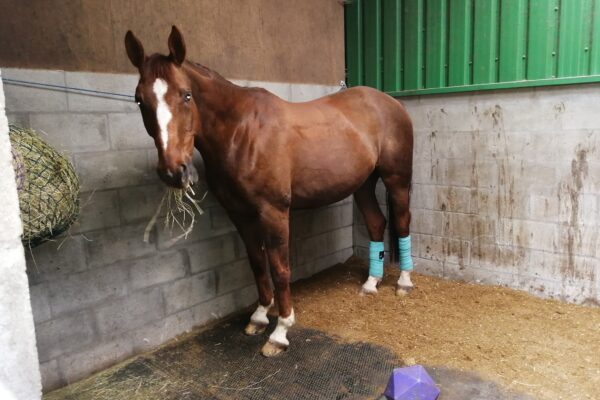 Who turned up the heat?

Who turned up the heat! That’s right, it’s been hot in North East Scotland too! It’s nice to have...

As I sit here, stuffed to the brim with turkey, mince pies and one too many helpings from the...